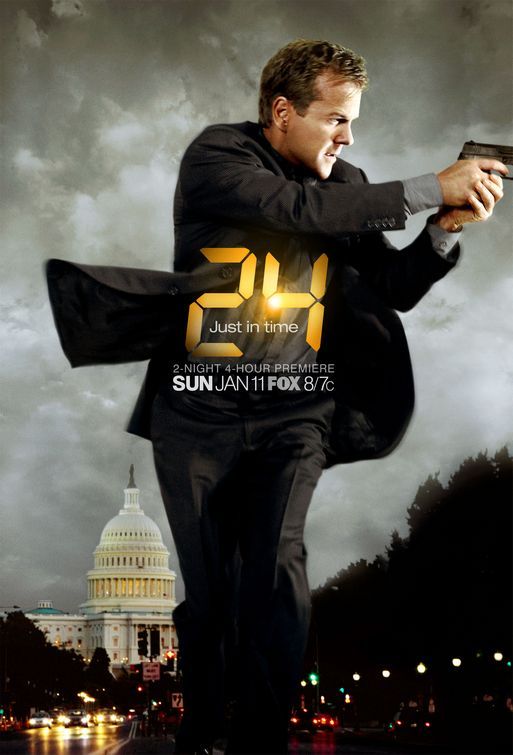 I remember being maybe 12 and staying up late (read: until mid-night) to watch 24. The seasons usually aired on the open channels here in Portugal 1 or 2 years after having been premiering on Fox. I watched, at least, until season 6 and God didn’t I loved the entire narrative.
There is a certain level of frustration on my part for knowing I haven’t finished the entire show, or that I won’t be able to re-watch it any time soon since it’s not on the open tv or even on the paid channels here, much less on Netflix or Prime Video.

Kiefer Sutherland as Jack Bauer was the heart of the show. I haven’t realized that until recently because I always enjoyed series with a twist of crime and drama at the same time.

The last couple of days, while in bed recovering, I’ve been enjoying Netflix over the “big” screen I have in my bedroom.

For me watching Films & Series is like a state of mind, I have a good show for everything. For example while playing Elite Dangerous I do like to watch something to which I don’t need to pay much attention to, like a comedy show (shoutout to Iliza Shlesinger for her comedy shows).
If I feel like I need a good science fiction I usually dive into Star Trek, which I’ve been rediscovering in a chronological order and I’m far from close to finish. Perhaps I decide I am tired of Star Trek and I delve into Travelers.

But to the point, last Saturday I felt like I should finally give Designated Survivor a go, the series was in my list for a couple months now, I had even received some good recommendations but that state of mind had never clicked and therefore this was just another show buried under a good dozens of other shows in that list.
All of the sudden I was again a die hard fan of Kiefer Sutherland, the show has it’s appealings but most of all the performance of the main actor is what keeps me glued to the screen and craving for more.

Now that I stop to think about it, I never seen any other actor have such impact on my viewing choices. One other actor I have learned to respect, for the duration of his best series to date was Zachary Levi and even him I don’t recall having seen him in any other long commitment show rather than Chuck.

As for me, the next couple days will be spent mostly in bed and watching Designated Survivor.